Rivals come together to commemorate the lives we are privileged to lead.

The Day:
The reverence in which ANZAC Day is held throughout Australia and New Zealand serves as an example of the privileges citizens of the two nations are fortunate enough to enjoy.

With the day serving as a symbol of the legends and myths the countries share as a means of creating a sense of identity, the annual Dragons v Roosters fixture is one of many events that has taken on significance for all who attend, regardless of differences, to come together in a shared setting to enjoy a sense of unity.

Adopted over time as a source of national pride, it is important to comprehend that just as it is for players on the field and supporters in the grandstand, the diversity and criticism of opinion and experiences encompass what the day truly stands for - the privilege of living in a country that offers opportunities for all who come to it, regardless of their means of arrival, along with ‘a fair go' for all to express themselves in their own way.

While national state of affairs should always be reviewed to ensure the improvement of life for all members of society, occasions such as ANZAC Day provide citizens with an opportunity to reflect on the lives they are fortunate enough to enjoy. 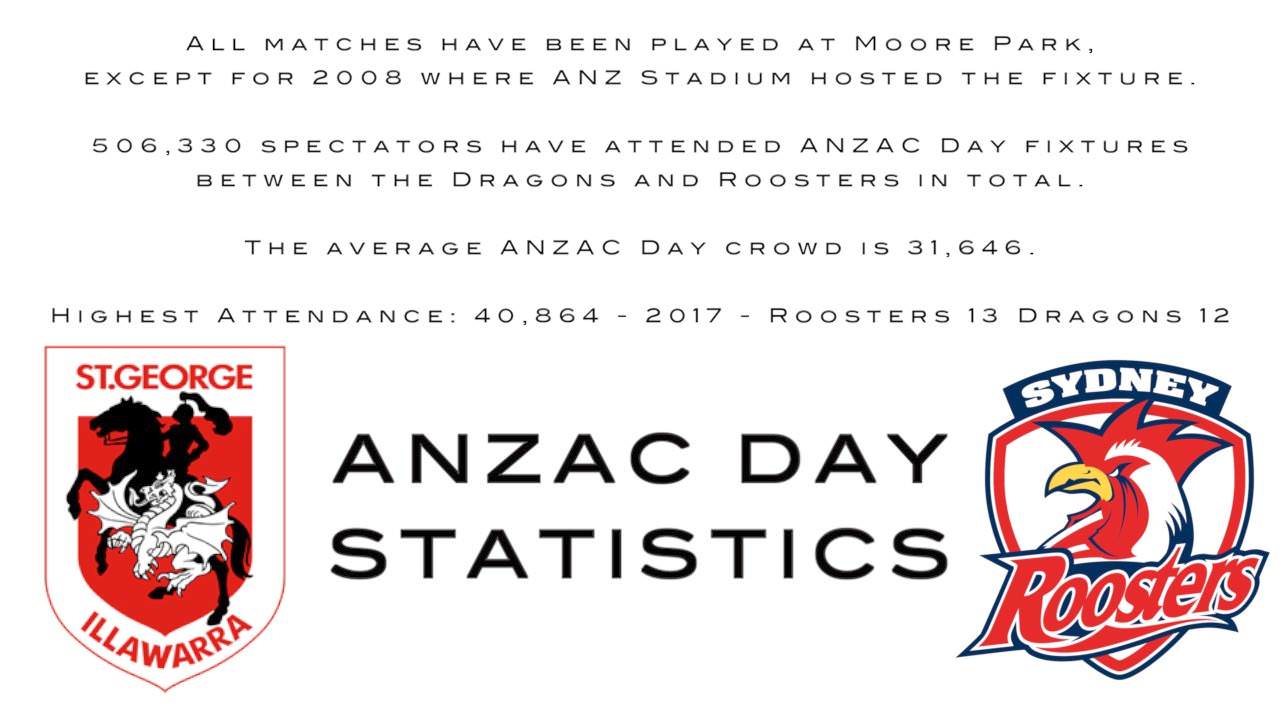 The Game:
Remaining in first position despite suffering their first loss of the season against the Warriors across the Tasman, the Dragons will have their sights set on improving upon last season's identical 6-1 start to the year despite a limited preparation.

Maintaining the core of the squad that went down in Auckland last Friday, second rower Jacob Host has been elevated to the bench in place of Hame Sele in a move by Paul McGregor to provide a number of the side's young forwards with experience in the top grade. The occasion will also bring up another significant milestone for veteran winger Jason Nightingale, who is set to level the record of 11 ANZAC Day appearances alongside Matt Cooper, Ben Creagh and Shaun Kenny-Dowall, while if the New Zealand representative crosses for a try, he will equal Cooper's scoring feat of five tries.

Boasting an impressive record of 10 wins from 16 ANZAC Day clashes contested since the fixture became an annual tradition in 2002, coach Paul McGregor will approach the match with some caution following the implications of last year's meeting. Having begun 2017 with a near perfect start, an untimely injury to Gareth Widdop proved costly for the joint venture, not just in the outcome of the golden point defeat against the Roosters, but also in effectively derailing the momentum of the side over the remainder of the season, culminating in a 38% success rate from their final 16 matches that saw the side fall from competition leaders to missing the finals entirely.

In an effort to avoid the mistakes of the past, look for the Dragons to expose the Roosters around the ruck from long-range with offloads creating space for halves pair Widdop and Ben Hunt to spread the ball to the edges, along with the blinding speed of Matt Dufty turning half-chances into four-pointers. In addition to the significance of the occasions for all involved, Wednesday's match will hold additional weight for centre Tim Lafai who is set to feature in his 50th game for the club since moving from Canterbury over the 2015/16 off-season. 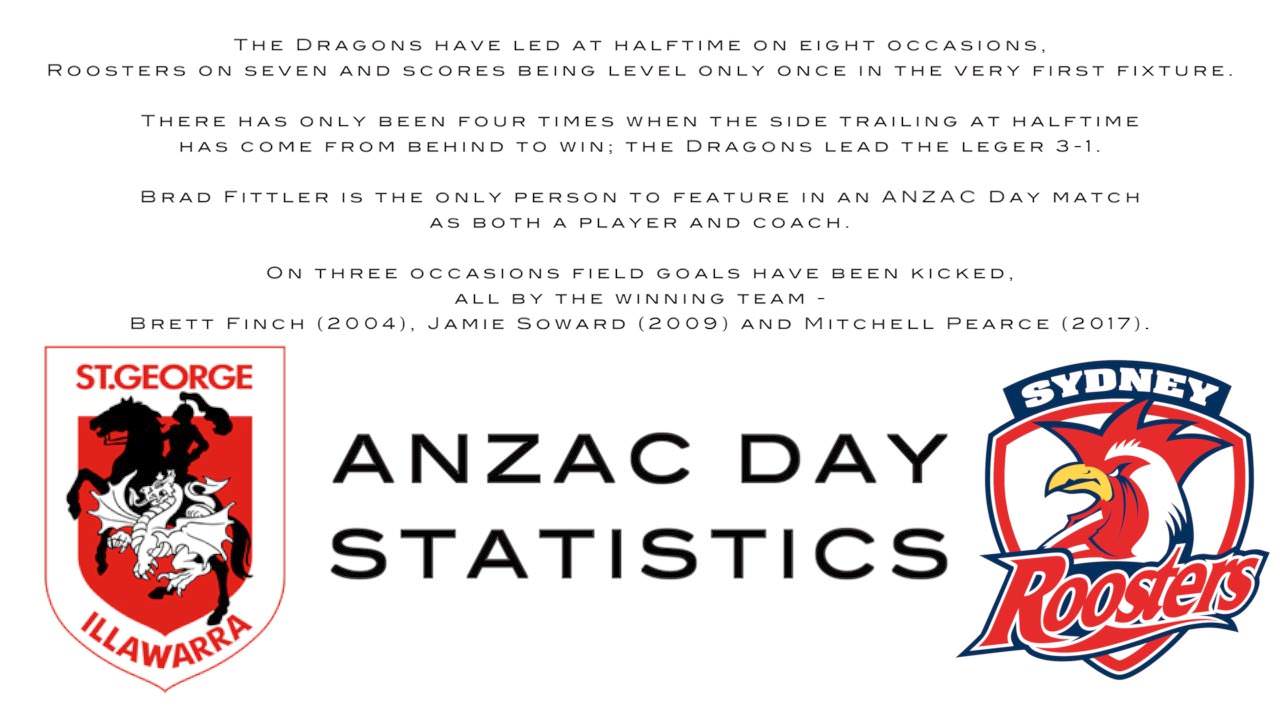 Winning in tenacious fashion last Thursday against a willing, but flawed Canterbury side, the Roosters will be hopeful of repeating their defensive shutout while advancing their efforts on the scoreboard in an attempt to inflict consecutive losses upon the Dragons.

Boosted by the return of representative forward Sio Siua Taukeiaho at the expense of returning veteran Frank-Paul Nu'uausala, coach Trent Robinson will be monitoring experienced hooker Jake Friend's health having been forced off the field with concussion against the Bulldogs. Should the premiership winner be unable to take his place in the final squad selected an hour before kick-off, look for former Canberra dummy half Kurt Baptiste to make his club debut off the bench, with impressive rookie Victor Radley starting for the time this season.

Keeping any opponent scoreless for the first time in two years at the conclusion of last Thursday's polarising clash, coach Trent Robinson will be hopeful that the defensive resolve shown by his side inspires similar results moving forward as seen during the Roosters last premiership winning campaign, wherein the Tricolours recorded shutouts on six occasions.

Holding a dominant record against the Dragons in all meetings since 2012, the Eastern Suburbs outfit will be hopeful of extending their winning ways over the joint venture having claimed eight wins from the past ten clashes, including three ANZAC Day victories following Trent Robinson's appointment five years ago.

Currently sitting in seventh position with a slightly above average win-loss ratio, the Roosters have yet to deliver upon the expectations brought on by their perfectionist recruitment, but as has been seen by the performance of the side in the weeks following the esteemed fixture, ANZAC Day often serves as a turning point for the club heading towards the remaining two-thirds of the home-and-away season. 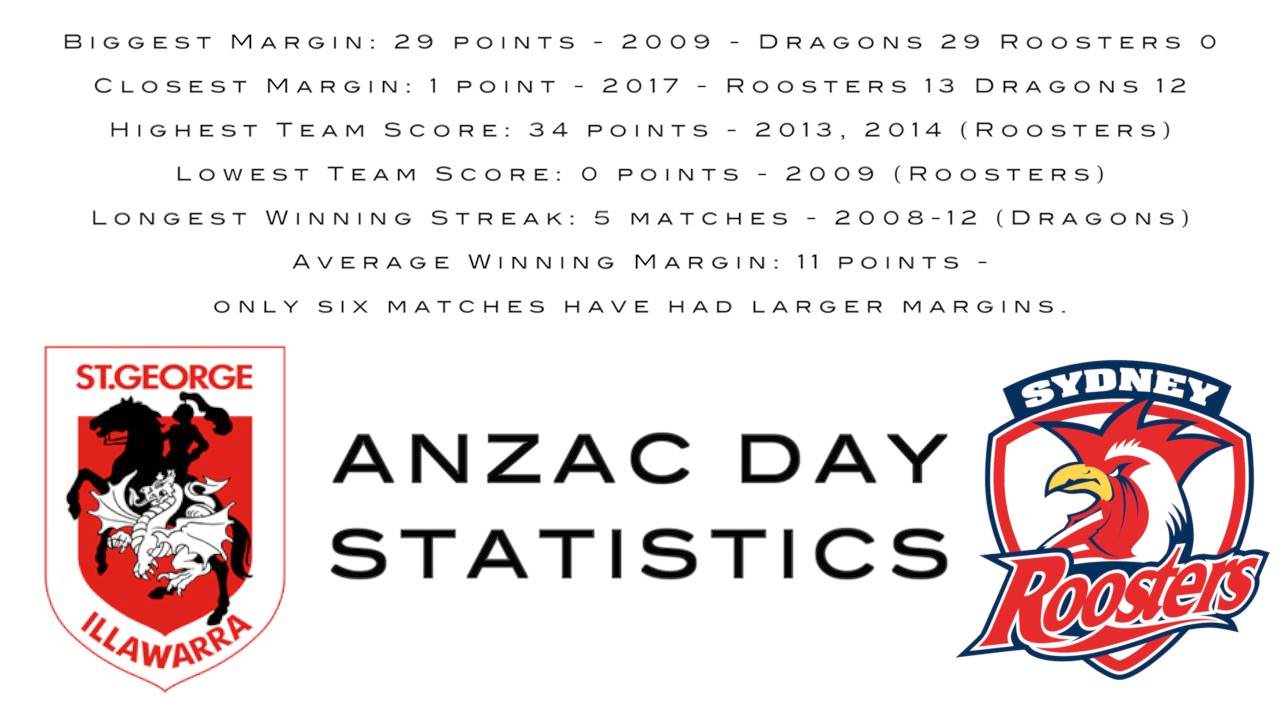 Dragons Key Player:
Having spent the past 15 years in the realm of elite sport across England and Australia, there are few occasions James Graham has yet to experience throughout his rugby league career.

From debuting in first grade at age 17, winning grand finals and captaining his country, the profound sense of reverence for the former Canterbury skipper will be a newfound experience as he lines up in his first ANZAC Day fixture for the Dragons.

Enjoying a simplified role under Paul McGregor, Graham has benefitted greatly from the absence of being relied upon as a chief attacking instigator, allowing him to direct his efforts towards asserting a forward dominated platform for the sides attacking weapons to capitalise upon.

As a veteran of over 400 domestic and International matches, the opportunity to experience a rare first so late into his career should see Graham thrive in the atmosphere of Wednesday's fixture and put his best foot forward in maintaining the joint venture's position atop the premiership ladder. 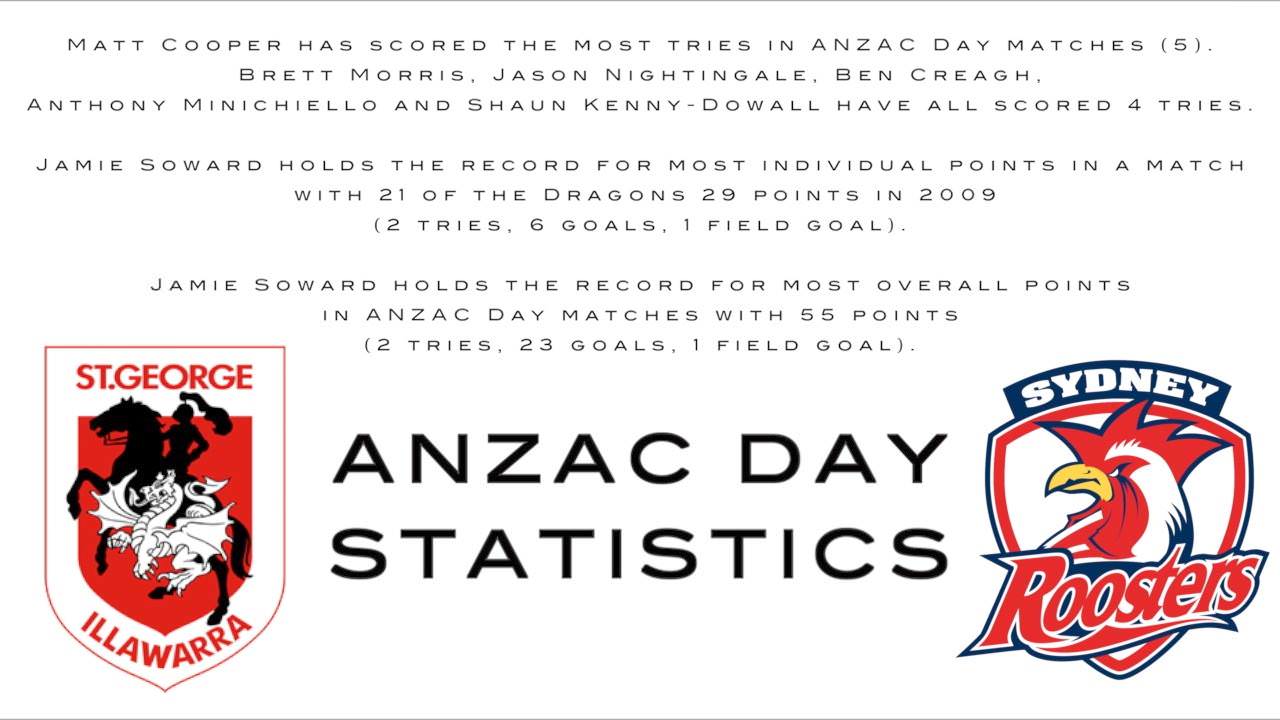 Roosters Key Player:
Making his NRL debut in the corresponding fixture two years ago, Ryan Matterson has experienced considerable development in the years gone by to become a focal point of the Roosters game plan.

Beginning his time in first grade as specialist five-eighth, the former Parramatta lower grader has shown great adaptability in venturing out into the centres before finding a home on the right edge as a second rower under Trent Robinson's tutelage.

Echoing the progression of representative utility Wade Graham, the 23-year-old has thrived in the forward pack with his ability to run lines causing plenty of headaches for opponents on the scoreboard, while retaining the creative touch from his time in the halves to provide an additional attacking threat that distinguishes him from the majority of contemporary forwards.

Initially regarded as a depth playmaker called upon due to the underperformance of prematurely preferred options, Matterson has shown himself to be an integral part of the Roosters line-up with the capacity to progress into the representative field should his efforts with the Tricolours continue to elevate the club up the premiership ladder.

The Favourite:
Maintaining their placement atop the competition table despite the disappointment of last week, the Dragons are expected to account for their historic foes and assert their claims as premiership favourites. 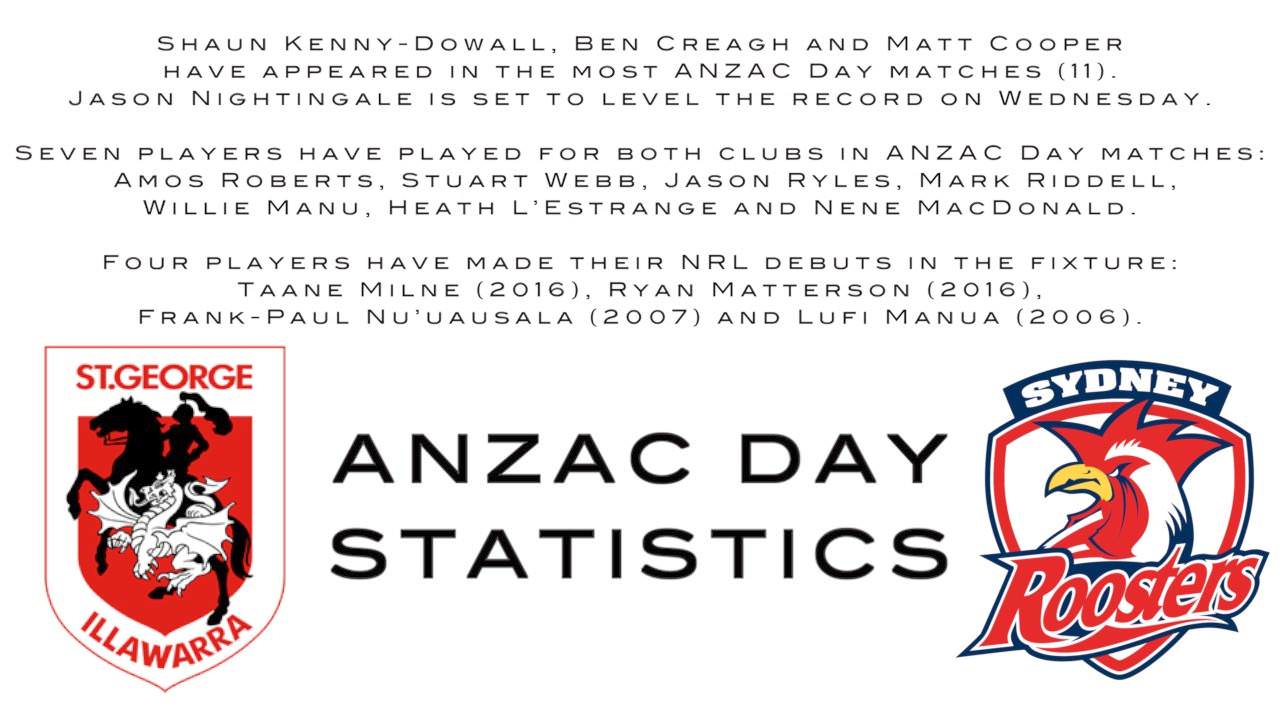 My Tip:
The imagery of warfare is often adopted in discussing the spectacle of professional sport as a means of conjuring excitement in the hearts and minds of spectators.

In reality, the distinction between the two arenas could not be further apart.

Regardless of which team finishes ahead on the scoreboard or the player awarded the Ashton-Collier medal as best on ground, the impact of Wednesday's match will be seen in how Australian's and New Zealander's are able to enjoy a lifestyle that allows them to commemorate and be critical of all that encompasses two countries united by a defining moment in shared history.

With that perspective grounding the match in a context that makes the outcome of a sporting contest appear trivial in comparison, look for the Dragons to come away with a narrow victory in a highly competitive affair.

Follow all the action LIVE in our Match Centre