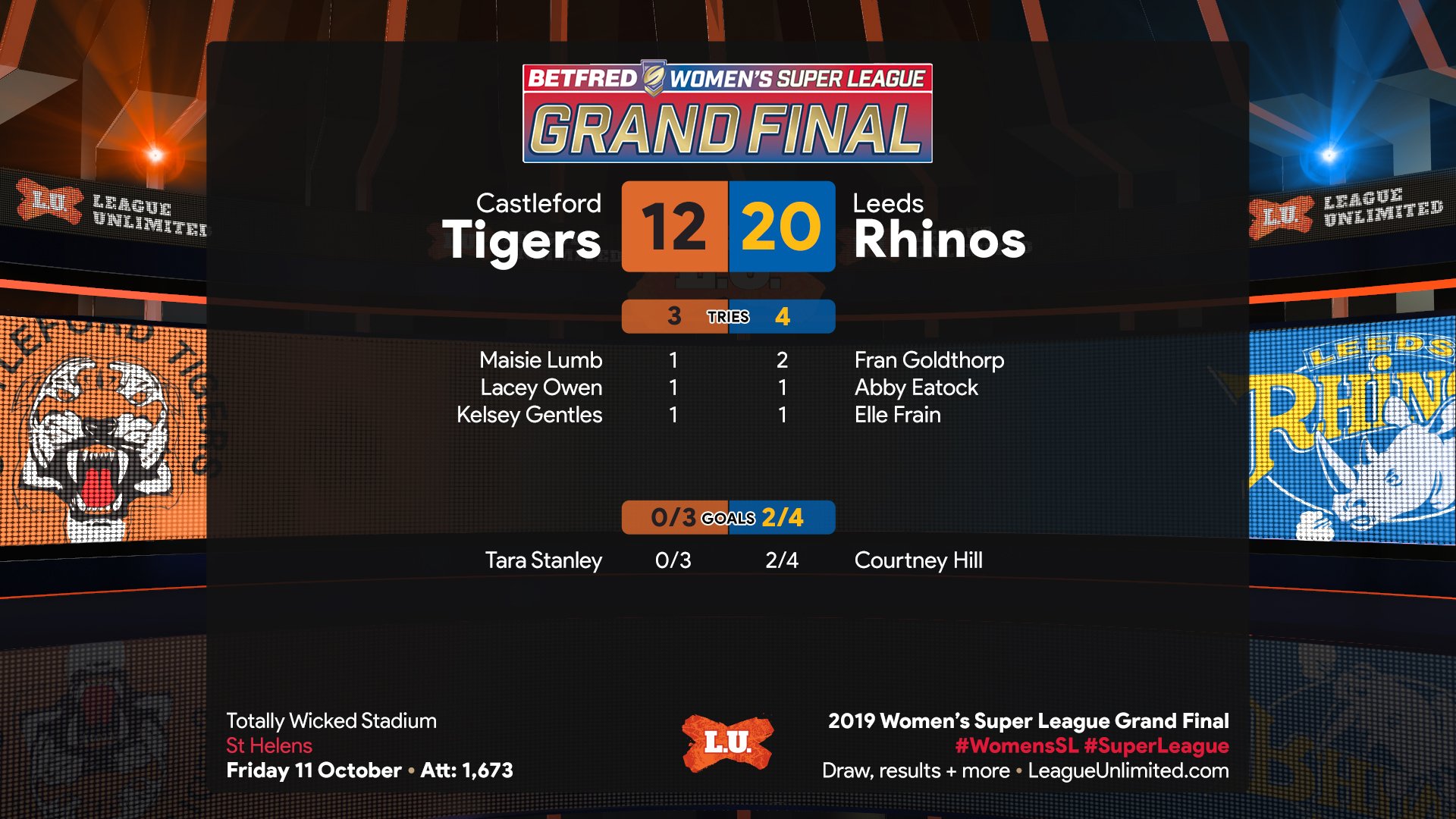 A superb second half performance has seen the Leeds Rhinos home with a 20-12 victory over Castleford in today's Women's Super League Grand Final at Totally Wicked Stadium.

Dominant all season after claiming the League Leader's Shield, the Tigers shot out of the blocks, opening the scoring through Maisie Lumb out wide in just the second minute. Having capitalised on an early Leeds error, Castleford looked like their season-long dominance would extend well into Grand Final day.

By the sixth minute the Tigers were two tries to the good, with Lacey Owen crossing on the left edge, exposing some soft edges from the Rhinos. Only Tara Stanley's wayward boot - missing both conversion attempts - kept Castleford within reaching distance of their opponents.

After withstanding the opening onslaught and conceding just the two tries, Leeds eventually switched the momentum, and after 13 minutes got their first four-pointer, winger Abby Eatock scoring another try in a prolific season after streaking away down the right edge.

The scoreboard wasn't amended at all between Eatock's try and the halftime siren, with a war of attrition opening up and the defensive performance of both sides going up a notch.

It wasn't until fifteen minutes after the change-of-ends that either goalline saw any meaningful action - Fran Goldthorp scored Leeds' second to level the scores. However Courtney Hill, similarly to Stanley, missed both her first conversion attempts which left scores at 8-all.

Much to the delight of much of the 1,673 in attendance at the St Helens venue, Leeds took the lead with sixteen minutes remaining when Goldthorp bagged her second try, and with the attempt being slightly closer to the sticks, Hill made no mistake to give her side a six-point lead.

The Rhinos consolidated their advantage with ten minutes remaining when Elle Frain went over after some great lead-up work from Hill, and when Hill converted it was all-but over with a 12-point lead.

Castleford managed what became a consolation try to Kelsey Gentles, which again went unconverted. The margin of eight was too much for the Tigers to overcome and with the siren, Leeds were crowned 2019 Betfred Super League Champions.