A disaster from start to finish

Few teams have endured a year with such little hope for the future as the Gold Coast Titans in 2019.

Managing just four wins from 24 matches to rank among the worst performing sides of the NRL era, the Titans conceded more points than any other opponent, boasted the second-worst attack, and finished the year with 11 consecutive losses to claim the wooden spoon eight points clear of their nearest rivals.

Coming into the year with a sense of optimism following an impressive recruitment drive headlined by representative stars Tyrone Peachey and Shannon Boyd, a dismal opening round loss set the trend for a year made all the more difficult by captain Ryan James (injury) and marquee halfback Ashley Taylor (personal leave) spending extended periods of time on the sidelines.

Parting ways with coach Garth Brennan in July following a review by Head of Performance and Culture, Mal Meninga, on-field performances declined further under interim coach Craig Hodges with the side averaging 36.5 points against over the final eight rounds - a 14 point increase from life under Brennan.

Finishing the year with their worst record since entering the NRL back in 2007, the Titans have pinned their hopes on Justin Holbrook - fresh from winning a Super League title with St Helens - to turn their fortunes around by improving results on the field and instilling a culture of success throughout the club as a whole. 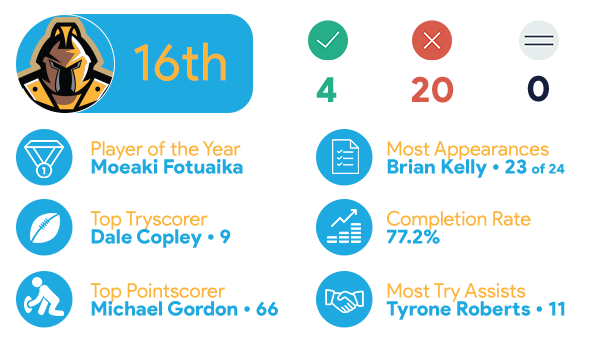 Coming into 2019 under intense pressure to perform following a 14th-placed finish in his first year at the helm, the premature departure of Garth Brennan with eight rounds remaining turned the side's underwhelming campaign into a complete debacle. With much of the playing roster seemingly content to write off the year in the knowledge Craig Hodges wouldn't be there in 2020, the final two months of the season saw the side outscored 104-292 with a succession of performances that suggested the competitive fire to compete had been well-and-truly extinguished.

In a year that saw every single team finish ahead of the Titans on the premiership ladder, the continued improvement of several young players provided fans with rare glimpses of hope for the future. Embarrassing many of his more fancied teammates with performances belying his age, Moeaki Fotuaika was a standout in the front row; AJ Brimson was named 18th man for Queensland following promising showings at fullback and in the halves respectively; while Phillip Sami produced one of the greatest try-saving efforts to deny Josh Addo-Carr a length of the field effort late in the season.

In assessing the squad at Garth Brennan's disposal prior to the season kicking off, it is hard to fathom how a team featuring the likes of Nathan Peats, Jarrod Wallace, Kevin Proctor, Shannon Boyd and Tyrone Peachey managed just four wins over the course of 25 home-and-away rounds. With big name players routinely producing performances well below their best and others languishing in reserve grade for extended stretches, the Titans came across as a club lacking leadership on the field and most damningly a sense of direction heading towards the future. Whereas the Newcastle Knights acknowledged their mismanaged salary cap and focus on investing in junior talent as reasons behind their horror 2016 campaign, the Titans of 2019 offered fans with little to root for on a weekly basis and even less for the years to come.

Doing their best to lay a forward platform that was rarely capitalised upon, Moeaki Fotuaika and Jai Arrow stood up with performances deserving of better on-field results. Showing no signs of falling victim to second year syndrome, 19-year-old prop Fotuaika finished the year as a deserving Paul Broughton Medallist, averaging over 130 metres per game from 21 appearances to earn his first cap for Tonga in the end of year internationals. Enhancing his reputation as a future captain of the club, Arrow continued his rapid development from an interchange forward at Brisbane to starting for the Maroons off the back of starring performances with the Titans - none more impressive than running for just under 300 metres early in the year against Cronulla.

Debuting two players in first grade - outside back Jesse Arthars and promising playmaker Tanah Boyd - the most impressive youngster to emerge in a year of disappointment was forward Jai Whitbread. Playing one game last season off the bench, the 21-year-old established himself as a regular fixture in 2019 with 18 appearances to earn an upgraded deal for the next two years. Finishing the year with two tries from 12 matches, speedster Arthars will head to Red Hill next year, while after gaining a mid-season release due to an abundance of young halves at Brisbane, Boyd featured in two matches over the final fortnight of the season.

Lower Grades round up

While results in the NRL proved few and far between for the Titans in 2019, the side's two feeder clubs - Burleigh Bears and Tweed Heads Seagulls - enjoyed impressive campaigns in the Intrust Super Cup. Winning their fourth Queensland Cup premiership by defeating Wynumm-Manly in the grand final, the Bears were cruelly denied the State Championship title after Newtown conjured a miracle four-pointer on the last play of the match. Returning to the finals for the first time in five years, the Seagulls enjoyed a much-improved season while also serving as a safe haven for halfback Ashley Taylor to make a low-key return after taking time out of the game to address personal issues.

Facing the unenviable task of turning the Gold Coast into a competitive squad, the Titans will be hoping Justin Holbrook can follow in the footsteps of Michael Maguire and Trent Robinson by bringing Super League success down under. Making no signings of note and giving little incentive for rival players to make the move to the glitter strip, the wooden spooners will need to improve dramatically over the off-season or face the prospect of experiencing further on-field disappointment in 2020.

Best lineup for next season