The highs and lows of momentum

At their best the Newcastle Knights were one of the dominant teams of the premiership in 2019.

At their worst the same side left long-suffering supporters questioning the commitment and effort of the entire squad.

Capable of being powerful in defence, potent in attack and attracting euphoric home crowds emboldened after years of heartache, the heights reached by the Knights ultimately made the disappointment of the year as a whole all the more crushing knowing what could have been.

Finishing the year in 11th position with ten wins from 24 matches, the Novocastrians showed marked improvements in attack with their highest points tally in six years, however defence once again proved to be a major shortcoming with only the Titans, Dragons and Warriors conceding more points.

Coming into 2019 with several impressive signings, including incumbent Australian front rower David Klemmer, a poor start saw the side manage a single win from their opening six matches to sit second last on the premiership ladder, before steadying the ship with a golden period leading into the representative season.

Temporarily sitting inside the top four following a run of six straight wins, a dramatic dive in form post-Origin saw coach Nathan Brown prematurely part ways with the club after calls to install Roosters assistant Adam O'Brien to the top job were exposed much to the chagrin of supporters who had stuck by the club through trying times.

Bowing out of the top eight race with a whimper and making minimal movement in the transfer market, O'Brien will be under immediate pressure to regain the trust of supporters as the Knights fight to secure a return to the play-offs for the first time since 2013. 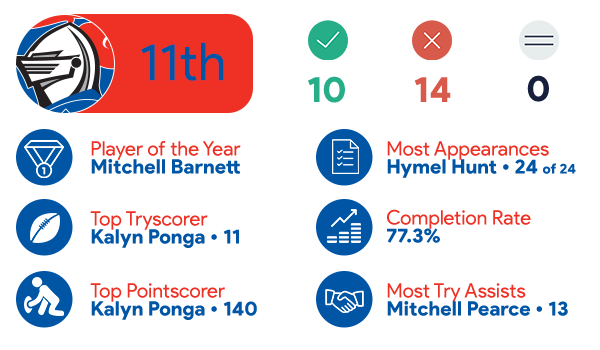 After bouncing back into finals contention with their biggest win of the year over North Queensland, the final month of 2019 left supporters fuming at how the Knights season sensationally went up in flames. Announcing his intention to see out the final three rounds following revelations club management had sought a new direction for 2020, Nathan Brown's position quickly became untenable following an embarrassing 46-4 defeat to the Wests Tigers at Campbelltown. Installing assistant Kristian Woolf for the final fortnight amid a wealth of negative headlines, including accusations by Newcastle legend Andrew Johns that the season had been sabotaged, fans aggrieved at Brown's immediate departure voted with their feet as little more than 8,000 hearty supporters braved the rain on Old Boys Day to see the side account for the last-placed Titans. For a club that had endured more than its fair share of adversity in recent years, the way the closing weeks played out left a bitter taste for many who had stuck by the club through three consecutive wooden spoons.

For a brief period the Knights became the toast of the NRL off the back of six straight wins. Claiming the scalps of Parramatta, New Zealand, Canterbury-Bankstown, St George Illawarra, Sydney and South Sydney in a winning streak not seen in the Hunter since the days of Johns and Buderus, the side displayed the winning attributes Nathan Brown had worked so hard to instil over the previous three years. Averaging 31.5 points in attack while conceding just 13 during the streak, every man played to his potential with forwards David Klemmer and Daniel Saifiti laying a dominant platform, halfback Mitchell Pearce directing play with distinction, and fullback Kalyn Ponga dazzling opponents with feats of individual brilliance.

With injuries and form making it difficult to settle on a permanent spine combination, the impact of constantly chopping and changing playmakers affected the side's ability to remain consistently strong. Dispensing with Kalyn Ponga's much-publicised switch to five-eighth less than a month into the season, a rotating cast of Connor Watson, Kurt Mann and Mason Lino all spent time in the number six jersey with varying results. Similarly, Watson's versatility coupled with the signing of Cronulla rake Jayden Brailey saw former New Zealand international Danny Levi finish the year on the outer.

Producing some of the finest form of his distinguished career - culminating in a deserved comeback for New South Wales - captain Mitchell Pearce was a standout during the side's dominant period. Leading the Dally M count prior to voting going behind closed doors with five consecutive man of the match performances, the 30-year-old halfback was in sublime touch before falling victim to a post-Origin malaise that fell over the entire squad. Similarly, Edrick Lee provided excellent service in his first year as a Knight to the extent that in his absence the side's winning percentage declined by 37 per cent during the second half of the season.

Debuting three teenagers in first grade late in the season, the Knights will have high hopes for Phoenix Crossland, Bradman Best and Starford To'a in the years to come. Called into the top grade just days before his 19th birthday, Crossland will be looking to press his case as the club's long-term number six after a brief cameo against the Warriors prior to Origin III. Providing a rare bright spot in the aftermath of the side's woeful showing at Campbelltown, Best defied his youth with three impressive appearances, while To'a bagged a sensational try on debut in the final match of the home-and-away season.

Lower Grades round up

Making minimal improvements from the team that claimed the wooden spoon last year, the Knights reserve grade outfit managed seven wins from 22 matches for an 11th-placed finish. Among the youngsters to impress Beau Fermor and Jirah Momoisea pressed their claims for NRL debuts in the near future, while current first grader Jacob Saifiti and emerging utility Tex Hoy were named Player's Player and Player of the Year at the club's presentation night respectively.

After finishing as minor premiers in 2018, the seventh-placed Knights bowed out in the first week of the play-offs twelve months later. In a highly competitive year where the difference between third and seventh came down to a single win, the elevation of several youngsters to the club's reserve grade squad saw the Jersey Flegg team suffer as a result. Coming through the club's lower grades as juniors, Mathew Croker and Luke Huth continued their progression to earn recognition as Player's Player and Player of the Year respectively.

Possessing a squad strong enough to challenge for the top eight next season, incoming coach Adam O'Brien will need to post early wins to justify the club's decision to part ways with Nathan Brown.

Best lineup for next season