Tumultuous, frustrating, pathetic are all words that have been described about the Penrith Panthers 2019 season, which left many questions about tactics, players and the overall state of the club.

2019 began on a rocky note with dramas both off-field amongst the playing ranks - several players embroiled in scandal - then later on inside the club - over the appointment of former coach Ivan Cleary which came in conflict with then-GM Phil Gould's attempts and reported deal with Wayne Bennett to take the Panthers job.

The Panthers finished the 2019 season in 11th spot, a significant drop from their sixth-placed performance in 2018 when the club was seen to be going places. Instead, the Panthers started the campaign in awful fashion with two trial defeats before a loss in Round 1 to Parramatta. From the get-go, their fortunes were weighed down by poor attacking form, which saw the Panthers crack the 20-point barrier just twice in the first fifteen rounds of the competition - incredibly both were losses.

Penrith did see victory in two of their opening four matches with those wins coming against Newcastle and then a golden-point victory at home against Wests Tigers, where an 80th minute try was needed to force the contest into the extra time period. The Panthers' run of form continued downhill until a Thursday night trip to Bankwest Stadium in Round 11 changed things significantly. The Panthers then began a 6-match winning streak after beating Parramatta, a streak which also saw the Panthers take the scalp of the reigning and eventual premiers the Roosters.

The streak ended with a defeat against Canberra, which saw the side again spiral out of form winning just one of their next six games before a final round blowout victory, thrashing the Knights 54-10. 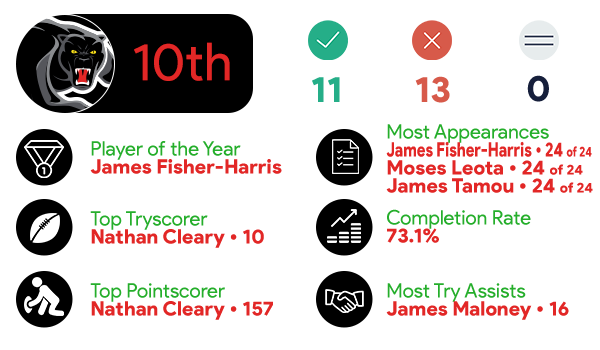 There were two turning two points for the Panthers in 2019, one came pre-season with the off-field scandal which saw a number of players caught up in sex video allegations, as well as dramas surrounding the return of Ivan Cleary as head coach. The positive turning point came with the Round 11 win over the Eels, who were expected to put the Panthers to the sword.

The confidence began to grow and the men in black went on that mid-year winning streak before it turned back for the worse - the Panthers lost a controversial match against the Raiders which saw Ivan Cleary come under investigation for alleged comments made to the referee Ashley Klein in the Panthers' Stadium tunnel. That point saw them lurch back to struggling in attack, and they took just two victories before the end of the year - one against the Sharks and one against the Knights.

It would be really easy to say nothing worked. But looking at the season as a whole, there were several things that did click for the Panthers - including the number of debutants that took the field for the Panthers - among them Brent Naden, Brian To'o and rookie half Matt Burton who was key to the Panthers win against the Sharks.

The Panthers' best performances of the season ironically came when either one of Cleary and Maloney wasn't involved. The attack issues weren't solely on the pair, as Penrith's forwards lacked the starch of recent seasons.

There were only a couple of clear stand-outs for the season for the Panthers, including second-rower Viliame Kikau - who was again an enforcer in both attack and defence for the Panthers, creating opportunities on the edges.

Other players who stood out for the Panthers in 2019 included bench front rower Moses Leota who started to find consistency and fullback Dylan Edwards who had an injury-free season and found consistent football. The other star was James Fisher-Harris who was again an enforcer, and ultimately won the Merv Cartwright Medal.

As per every year it seems at the Panthers, there are a large number of debutants and this season was no exception with nine players all making their debut. Each of the debutants made their own impact on the season including Spencer Leniu who immediately made it known he was going to be a force of the future along with fellow rookie Liam Martin who showed he wasn't a force to mess with.

Although each debutant made a big impression in 2019, Brian To'o quickly became a fan favourite with his strength and aerial finishes.

The Panthers' 2019 Canterbury Cup season was average by their recent standards, starting off well being premiership contenders. Sadly, a string of injuries in both NRL and Canterbury Cup saw their season splutter and they eventually fell to a Week 1 finals loss to eventual grand finalists the Wentworthville Magpies.

2019 in the Under 20's for Penrith was a good one, consistently sitting towards the top of the ladder and ultimately the Panthers fell at the final hurdle with a defeat in the preliminary finals against South Sydney after having downed the Roosters in Week 1.

Penrith have a tough draw to start the competition, but if they can get through it they can be solid top 8 contenders and with the likes of Kikau can no doubt push for a top four spot if they have the right kind of season. If the Panthers can get their way over the line then they have proven they can get into the right attacking positions as they did in 2019.