Andrew Ferguson looks back at the Wests Tigers' 2019 campaign which yet again saw them clawing at the eight but not quite reaching finals footy.

The Wests Tigers had approached 2018 confident that their copious coaching sagas were all behind them. Ivan Cleary had put a broom through the roster, toughened the sides defence and made them competitive, before the inevitable coaching merry-go-round kicked into gear yet again, and Cleary decided to leave his contract, joining former club Penrith.

The Tigers though found a magnificent replacement in premiership winning, and Test coach Michael Maguire. While the Tigers ended up finishing 9th for the third time in the last 4 seasons, they looked like they finally had some cohesion within the playing ranks, which saw them in essentially a play-off for the finals in the last match of the regular season.

While the Tigers lost more often than they won, they were more consistent than in previous years, with just two blowout scores put on them, both in the space of a three week period. 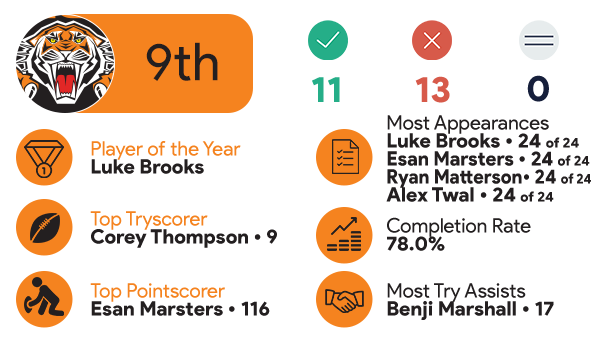 The Tigers started slow, winning 5 of their opening 12 games, copping heavy losses to Parramatta (51-6) and the Roosters (42-12) to drop out of the 8 and down to 11th. Come Round 14 they survived a fast finishing Cowboys side to hold on for a 27-26 win. This was one of six wins in their final 12 games, however they were much more competitive from this point on.

The old boys - Benji Marshall and Robbie Farah - had their best club seasons in several years, so much so that Benji earnt a Test recall for New Zealand after a 7 year absence, while Farah was being pleaded with to go around for one more year. Robbie retired after the final game of the season while Benji is set for one more season in the black, orange and white.

The Tigers played five games at Bankwest Stadium in 2019, scoring just one win and amassing only 54 points for, with 4 losses and 142 points against. The Tigers will play 7 games there in 2020 with new co-tenants Souths and Canterbury joining them alongside the Eels.

Recruited from the Roosters, Ryan Matterson had a magnificent season in the back row. The consistency of his performances were so good that he became the 18th man for New South Wales in this year's State of Origin series.

Experienced half Benji Marshall had a stellar season, playing much more balanced football which also saw the occasional return of his trademark steps that have filled highlight reels for years. He brought up 300 NRL games in the mid-season period, something that seemed unlikely back at the start of his career after he succumbed to a mass of injuries.

Played just six games - the first 6 of the year - prop and former captain Russell Packer was dropped after a woeful performance against Parramatta, which saw the Tigers concede 51 points. For the salary he's on and the experience he has, he was expected to be a leader in this Tigers pack. Instead he was replaced by rookie Thomas Mikaele who showed plenty of promise.

The goalkicking of Esan Marsters was dire, landing just 65.57% of his attempts in 2019. He had the duties taken off him by the end of the season and was replaced by a part time kicker in Paul Momirovski, who kicked at 75%. Marsters then failed to hold his place in the New Zealand Test side and then up and left the club at the end of the season.

Big prop Thomas Mikaele had a great start to his career in 2019, missing just one game and finishing the season in the run-on side. He'll be full of confidence going into 2020.

The Western Suburbs Magpies ran third last in the Canterbury Cup in 2019, making them one of the four sides who failed to qualify for the finals.

In a phenomenon becoming quite common at Wests Tigers, the Under 20 side finished 9th, the same as their NRL counterparts.

The Tigers have lost Esan Marsters to the Cowboys and have a disgruntled Ryan Matterson reportedly wanting to leave after just one season. The club is hoping to perform a straight swap for Matterson.

They have a lot of their cap tied up in players who were not NRL regulars in 2019 - Russell Packer, Elijah Taylor, Ben Matulino, Chris McQueen and Josh Reynolds - between them, they played a total of 47 games in 2019. If they can clear these players, they will have a lot of coin to throw at some elite players, if not for the 2020 season, then in 2021.

At this stage, there are few changes aside from the retirement of Farah, while yet another long term injury for Jacob Liddle means the Tigers will be starting the year with a new rake. They should be chasing a top 8 spot, but if they can finish 9th again, it may well be a better than expected finish.