So much was expected of the Brisbane Broncos in 2019. With the most exciting forward pack in the competition and a perfect blend of youth and experience, a top-four finish was expected.

Scraping into the finals in eighth position was not ideal but a 2-6 start to the year was not either.

For the most part, Brisbane's young forward pack delivered with Payne Haas experiencing a breakout rookie season including a serious tilt at the Dally M medal.

All their dominance up front meant little though with a constantly changing spine that was unable to build much fluency in attack.

Even by their 58-0 drubbing at the hands of Parramatta, the Broncos had a fullback and hooker playing in the halves.

Both Darius Boyd and Jake Turpin can't be knocked for a lack of effort (despite what some might say about the former) but they simply were playing out of position and it showed.

The Broncos are reportedly close to signing Brodie Croft for the 2020 season as their answer to the lack of a dominant half at the Red Hill since Ben Hunt's departure.

But Croft has been playing within the best rugby league system in the country at the Melbourne Storm.

For many players who leave Melbourne, the challenge is being able to perform at the same level in a club with a different culture and environment.

Once more heading into the pre-season all the talk will be on whether Brisbane can finally deliver on their enormous potential and the focus again will be on the number six and number seven. 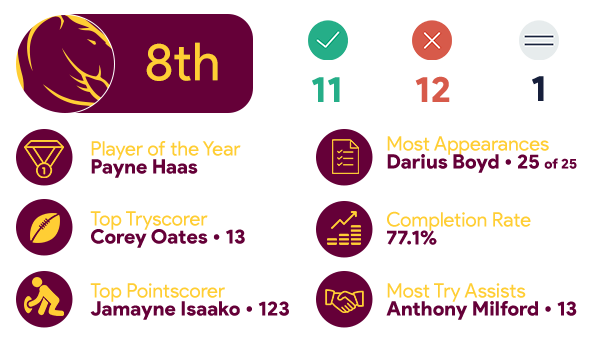 It is hard to pinpoint exactly where everything went wrong for the Broncos. They did suffer a disappointing 30-14 loss prior to being pumped by Parramatta in the finals. But they had won three of their past four before that game. Perhaps the 26-18 loss to the Titans, where they had a three-game winning streak snapped and lost young rising halfback Tom Dearden to injury is where it all turned. The Broncos had won three of four games that the 18-year old played in and finally looked to have found an answer to their uncertainty in the halves.

The energy and enthusiasm of their young pack instilled fear into the opposition. The likes of Payne Haas and David Fifita consistently ran strong metres but it was their mix of power and speed that caught out teams in defence. It was on full display late in the season when Haas outpaced a number of Panthers players to score the match-winning try. The challenge now will be building on this year as the opposition does more video work on the duo.

The halves. This is no surprisingly revelation but the Broncos often had no trouble powering upfield and earning strong field position. But when near the opposition line, they lacked a dominant half to be calling the shots. Wingers Corey Oates and Jamayne Isaako combined for just 17 tries, down from 28 the year prior. Brisbane did not use their speedy outside backs enough this year instead relying too much on their big men up front.

Averaging 185 running metres, 35 tackles and five tackle busts, it was hard to believe this was Payne Haas' first full year in the top grade. Haas had a similar power and explosive tackle-busting ability to other elite NRL forwards, but not all of them could do it for so long. The 19-year old powerhouse consistently pumped out 60-plus minutes every game. Haas made a name for himself last year when he successfully forced an opposition player into touch despite nursing a fresh shoulder injury. This year he showed that was no fluke and that he is willing to work hard to succeed, something that is not always guaranteed at a young age.

Along with Haas, hooker-turned-halfback Jake Turpin enjoyed a stellar 2019. While he was forced to play out of position for eight games, Turpin still brought plenty of energy and enthusiasm. Andrew McCullough has been a mainstay for the Broncos in the number nine jersey, renowned for his tough playing style and relentless desire to give all he has for the team. He has long been an admirable member of the squad but some calls came suggesting that Brisbane needed more spark out of dummy-half. Turpin provided just that with a nice combination of speed and finesse.

Wynnum Manly Seagulls were the best of Brisbane's feeder clubs in 2019, making it all the way to the decider before going down to the Burleigh Bears.

The Seagulls were also Brisbane's most impressive side in the Hastings Deering Colts competition, finishing the regular season in third and also progressing through to the grand final. They were defeated 34-28 by the Sunshine Coast Falcons.

The Broncos have the core of a squad capable of challenging for the premiership. For coach Anthony Seibold, the challenge is making sure the players believe this and do not fall into the trap of listening to negative press. Brisbane used to be a side that constantly made you work for the two points.

In the past couple of years, however, they have been far less consistent and lost some of that toughness. Having the right attitude will go a long way to ensuring the Broncos book another finals appearance in 2020. Seibold is under immense pressure to deliver with even another top-eight finish not guaranteed to see him stay in the top job.

With so many question marks over Brisbane heading into next year, missing out on the finals for the first time since 2013 is not out of the equation.