It's hard to believe that the Rabbitohs had lost just one of their opening 11 games this year.

At that point they were considered premiership favourites. But a gruelling Origin period, where they dropped four games straight, threatened to undo all their hard work.

Master coach Wayne Bennett rallied his troops to go on and win six of their next nine to finish inside the top four. But a 16-10 preliminary final defeat to Canberra brought an end to their season.

It was the second year in a row that Souths had bowed out just one week shy of a grand final appearance. For many teams that would be a proud achievement.

Yet the red and green know all too well that you have to take your opportunities when they come. Following their 2014 drought-breaking success, the Rabbitohs went on to claim seventh and twelfth-place finishes in the next three seasons.

Their premiership window had slammed shut just like that. While they will be without experienced forwards Sam Burgess and John Sutton next year, the core squad is still brimming with talent and capable of the title.

The challenge is making the final step before it is too late. 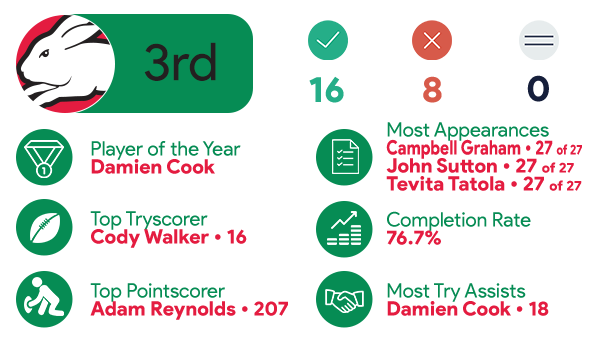 Origin period proved a huge turning point in the context of South Sydney's season. Pivotal players Cameron Murray and Damien Cook both had pivotal roles in the series while Cody Walker was at the forefront of enormous public criticism for his on-field performance and off-field comments about the national anthem. Walker was completely justified in what he said as it is great to see players standing up for what they believe in. But unfortunately with his bravery came public condemnation - an unwelcome distraction for one of the competition's early in-form players.

The Origin period in general though was tough for South Sydney. They recovered to finish in the top four but missed out on home-ground advantage in that crucial opening week of the finals.

When the Rabbitohs played with speed and precision, they were lethal. Much was made during the year of the influence that Murray and Cook had on South Sydney's results. Murray transformed himself into one of the league's best locks. His greatest attribute was his quick play-the-balls which allowed Cook to scurry out of dummy-half and catch the opposition off guard. Then, halves Adam Reynolds and Cody Walker would get the ball out to their speed men on the edge such as James Roberts.

A criticism of South Sydney's attack was that it was too predictable in its reliance on the left edge. But what seemed to be missing in the later stages of the competition was the speed at which attacking movements were performed.

While dangerous in attack on the edge, one area of improvement for the Rabbitohs in 2020 may be in their edge defence. 12 of the 14 tries they conceded during the 2019 finals series were on either their right or left edge.

While it is to be expected that teams are more vulnerable on the edge where there are more split-second decisions made, the Rabbitohs only have to look at the defensive fortitude of cross-town rivals the Roosters to see that communication in defence is key to winning a premiership.

Cody Walker was the best player in the competition in the opening 11 rounds before South Sydney's Origin slump. During that time he had 11 tries, eight try-assists, eight line breaks and 42 tackle busts. The numbers did dry up from there, Walker managing five tries and eight try-assists from his remaining 14 games - still commendable numbers all things considered. The 29-year old is one of the most naturally gifted playmakers in the game and should still deserve enormous credit for inspiring the Rabbitohs' early-season charge.

Cook and Murray were also pivotal to the team's success but since their form has already been discussed, it is worth instead noting the impressive stint of Braidon Burns. Burns was unfortunately restricted to just nine games due to injury. But during that time he established himself as one of the league's most improved outside backs. The 23-year old was evasive with the ball in hand, with a nifty combination of speed and power seeing him boast 39 tackle busts from his nine matches in 2019. Burns also won the Bob McCarthy Clubman of the Year award for 2019, which has previously been awarded to club legends such as Burgess and Sutton.

Already having experienced a taste of first grade at the Raiders and Sea Eagles, Liam Knight may have found a home for himself at Redfern. Knight was an unsung hero up front for Souths in 2019, stepping up when Sam and George Burgess were out through injury or suspension. The 24-year old was producing his best work at the end of the year, averaging 125 running metres in 50-minute stints during his final 10 games. With Sam Burgess and Sutton departing the pressure is on young guns like Knight to step up.

The Rabbitohs Canterbury Cup team, led by the competition's Player of the Year Billy Brittain, finished the regular season in second place just one point shy of first. They earned the week off with a 32-12 qualifying final win over the Bears but were knocked out one game short of the decider by the Magpies.

The future is bright at South Sydney after their Jersey Flegg side took out the title in 2019. They finished the regular season in fifth position yet toppled top-four heavyweights Cronulla and Penrith before a 16-14 win in the grand final against Canberra.

Losing Burgess and Sutton, who boast over 500 games in the NRL between them, would have sceptics doubting whether South Sydney can improve on this season's result. But with Bennett at the helm anything is possible. There is still plenty of time before kick-off next year and with money in the bank don't be surprised if the Rabbitohs land a marquee signing or two.

Much of their success in 2020 will depend on how the likes of Knight and Junior Tatola can step up in the absence of two of the side's most consistent forwards. A top-four finish will be expected and if they can manage the Origin period well and stay injury free it is more than achievable.