Six again. The two words that, four months on, still remain imprinted in the minds of Canberra Raiders fans. Many may still think it cost them a premiership.

Five-eighth Jack Wighton has moved past it.

"It's done - it's buried… we don't mention it at training," he told foxsports.com.au last week.

In fact, it seemed like the entire Raiders squad knew they would have to move past it when Ricky Stuart fronted the media shortly after.

Famous for his blow-ups, fans waited eagerly for Sticky's next tirade. But this time, there was nothing.

Nothing except praise for what the Roosters had achieved and how he was determined to get the Raiders back to that position next season.

It was an immense sign of maturity from Stuart and by extension highlighted the biggest improvement in Canberra last year.

Unlike previous seasons, the Raiders of 2019 were a more resilient bunch. Defence was the priority.

Canberra conceded 374 points, a stark comparison to the 540 they had let in during 2018, when they finished ten points adrift of the top eight.

They scored more tries that year but learned that the work you do without the ball is more important.

Meanwhile, Jordan Rapana and Joseph Leilua have both left with Curtis Scott the new recruit to fill in on the edge - as long as he is cleared by the Integrity Unit after a less-than-desirable start to his time in lime green.

Canberra still possess one of the most dangerous and versatile forward packs in the competition.

Stuart opted for a slimmed-down, more agile pack last year and it paid off, with Josh Papalii enjoying his best season to date with the club.

Meanwhile, John Bateman was a revelation on the edge as his competitive spirit often brought out the best in his teammates.

Then there's Josh Hodgson, trailing behind to take advantage of a retreating defensive line.

The weight of expectations is not always something that the Raiders have thrived under.

Canberra flew under the radar for at least the first half of last season with many expecting they would eventually revert back to their old ways and fade away.

This time around there is a target on their back and teams will be better prepared.

The last time the Raiders made a preliminary final was in 2016 and the following two years they finished in 10th position.

The other question mark surrounds the partnership of Wighton and Williams.

Wighton, while vastly improved in the later stages of the season, is still learning and finessing his kicking game.

Meanwhile, the transition from the Super League to NRL is not always smooth as playmakers do not have the same time and space to prepare each play.

Canberra are Wagga-bound again in 2020, taking one home game to the Riverina city. Newcastle will feature in this year's "home away from home" match at McDonald's Park. Canberra will have a varied travel schedule this year when they head on the road too - the Warriors (Eden Park), Wests Tigers (Tamworth), Roosters (Perth) and Rabbitohs (Gosford) have relocated their matches when they are set to host the Raiders.

The Raiders will be grateful to open and close the season in the comforts of their home ground at Bruce in the ACT, while they'll also benefit from a glut of home games during the Origin period which should see them well in contention yet again for a run at the finals and the chance to go one better in season 2020. 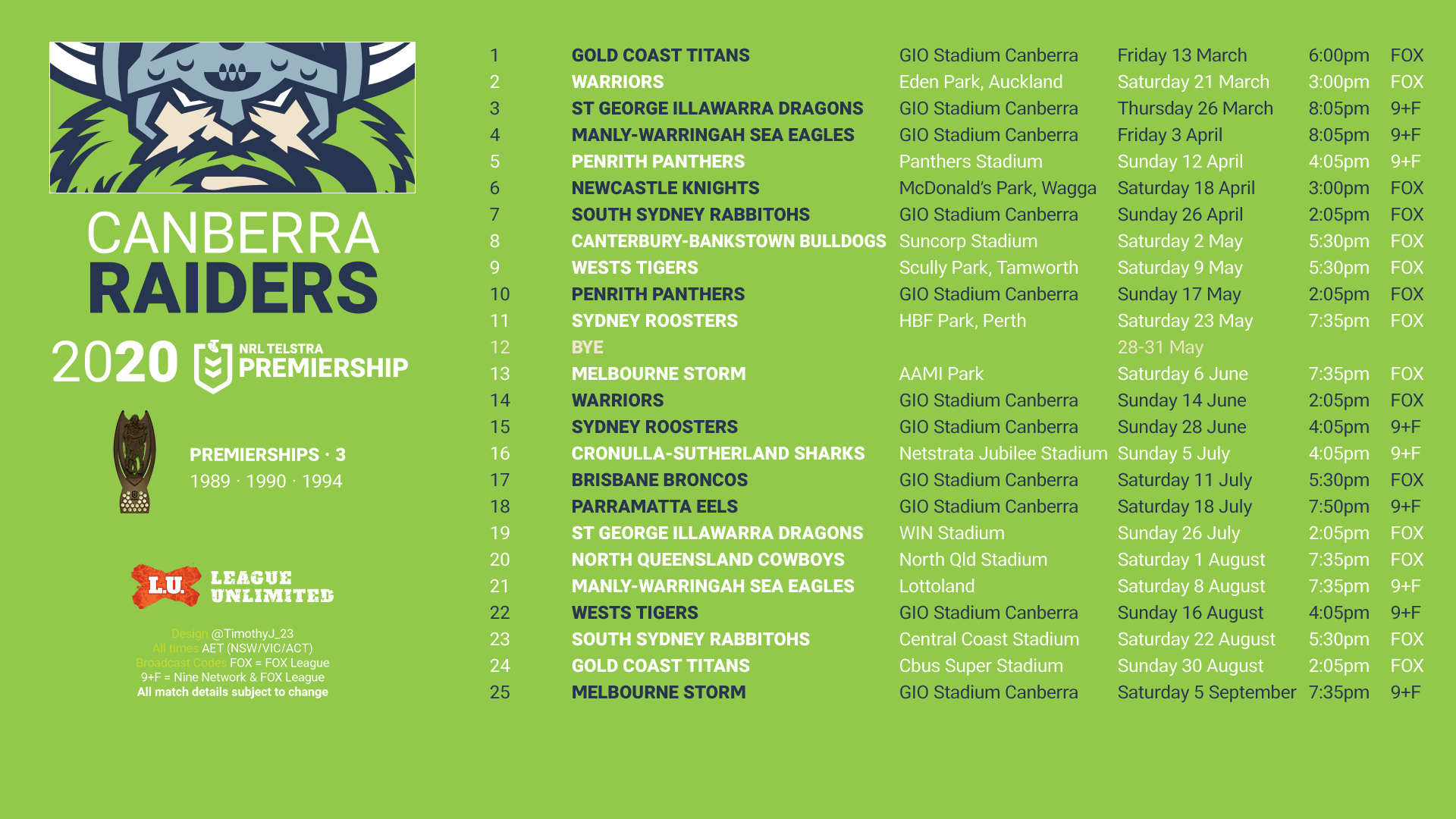 All the pressure is on Wighton and Williams to capitalise on playing behind one of the most consistent packs in the league.

The success of Bateman and fellow Brit Elliott Whitehead should give Raiders fans confidence that the club rarely gets its English imports wrong.

But much of Canberra's success will depend upon how quickly the pair can gel.

The Raiders, in both attack and defence, were far more patient and in control last season.

They were more confident in defending their line to victory as opposed to pushing a pass or trying the miracle play.

When they were close to the line, their outside backs were scoring off slick, fast-moving shifts of the ball where the likes of Bateman ran pinpoint decoy lines.

The Raiders will set the tone for their season early and that will depend on how quickly Wighton and Williams can figure out their respective roles.

With Scott's future at the club and availability for selection up in the air, there are a couple of options open for the Raiders.

Bringing in the ever-reliable Michael Oldfield is an obvious solution.

But 2020 could also see Harley Smith-Shields make his NRL debut.

Smith-Shields was elevated into Canberra's top 30 squad for this season and was awarded the club's Jersey Flegg Player of the Year Award last year.