The Bulldogs have endured a few lean years, however off the back of an enormous roster cleanout and a squad which showed more heart than Phar Lap at the backend of 2019, coach Dean Pay is looking on the cusp of a finals return in 2020.

Sometimes you have to cry before you can really smile, and in the first half of the 2019 season the majority of Bulldogs fans were elbow deep in a jumbo box of Kleenex. In fact, they seemed a galaxy away from finals football and looked destined for the dreaded Wooden Spoon after a shambolic start which netted a pathetic 3 wins from their first 14 matches. Star player Kieran Foran had another horror year with injury, with a lower leg injury keeping him out of the first half of the year, in a cruel twist of fate it was following their first win of the year against the Tigers. Without their marquee signing, the Dogs struggled with any sort of cohesion in attack to score enough points to defeat any of the top sides.

In the second half of the season however they looked a completely different outfit, complementing the mid-season recruitment of New Zealand fullback Dallin Watene-Zelezniak from Penrith, they began to improve as a defensive unit in leaps and bounds. Canterbury began frustrating opposition sides who were expected to dominate them on paper with their resolute goal line defence, managing a late revival by winning an incredible 7 out of their last 12 games to almost storm home and jag an unlikely finals spot. What was so impressive about their late spree, was that all 7 of their victories were against teams who were in contention for finals football, including Souths, Parramatta, Cronulla and then they finally clicked in attack in Round 26 racking up 30 points over the Broncos.

While 2019 was a Jekyll and Hyde season, there is plenty of optimism for their diehard fan base to look forward to in 2020. A number of their less experienced first graders in Lachlan Lewis, Jeremy Marshall-King and Reimis Smith gained another valuable NRL season under their belts, which is likely to prove to be a huge benefit for Dean Pay's squad as they line up for 2020. With the recent recruitment of highly rated English prop Luke Thompson confirmed to be joining the kennel in 2021, if these young guns can match the consistency of their star players in William Hopoate and rock solid skipper in Josh Jackson this year, then the excitement at Belmore will hit fever pitch after a what has been a long drought of success for the one of the league's most famous clubs.

While coach Dean Pay had his critics early in his coaching tenure, following their late season turn around it is now clear that his young squad has now bought in to what he and the coaching staff are trying to achieve. The Dogs have resisted the temptation to recruit any big names for 2020, making some value buys that complement their style of play including Storm backrower Joe Stimson, Panthers hooker Sione Katoa and Rabbitohs workhorse Dean Britt, who has been given the opportunity to follow in his legendary father Darren's footsteps in the blue and white.

An ace up the Bulldogs sleeve is captain Josh Jackson who any NRL fan will tell you gives his all in every minute of every match for the club. Their late surge in 2019, saw Jackson again not only lead by example with his tenacity with and without the ball, but what was different was that 16 other players followed his lead. This saw team after team leave the ground with ice on their ribs and a limp to the dressing sheds as the famed club theme of the ‘Dogs of War' began to stir.

The Dogs did show some creative flair in attack in the back half of 2019, with Hopoate and Smith proving a lethal combination on the right edge, while second-rower Corey Harawira-Naera also had a breakout year at the club. Once they get some quality ball then they are going to be hard to manage for any defensive line.

Canterbury will again not be expected by the experts to trouble the top sides and traditionally this is when the Bulldogs are at their dangerous best.

They finished 16th in attack last season and their biggest attacking threat Kieran Foran has been ruled out until Round 15 at best. Attack wise Foran was the outright leader in try assists despite only playing 14 games last year. They now need to rely on the limited experience of Lachlan Lewis to run the show alongside Jack Cogger or 3 game rookie Brandon Wakeham.

History suggests that great halfbacks win you comps and given their attack it what desperately needs to improve, it looks to be a very similar set up to the year before, and this will be a bridge too far for Canterbury who will need to restrict each opposition team to 2 tries a game to be a chance of letting their new and improved goal line defence lead them to victory.

The Bulldogs have a decent opportunity to get off to a good start in 2020, facing fierce rivals the Parramatta Eels in the season opener. The Bulldogs stay in Sydney for the first 6 weeks, with 4 of those games at ANZ Stadium, including the annual Good Friday clash with the Bunnies. They then rack up some frequent flyer points with trips to Townsville, Brisbane, Auckland and the Gold Coast over the Origin period.

With their traditional Queen's Birthday Monday clash with the Dragons locked in, they farewell ANZ Stadium against Souths for the final time while it is redeveloped in Round 15. They then play their first home game at Bankwest Stadium versus the Warriors before facing a tough run against the Storm in Perth and the defending premiers the Roosters at the SCG.

Their run home to the Finals sees them play the Knight twice, firstly at home and then away for the final round, in between Sydney rivals the Sharks, Dragons, Panthers and the Tigers in the penultimate round. 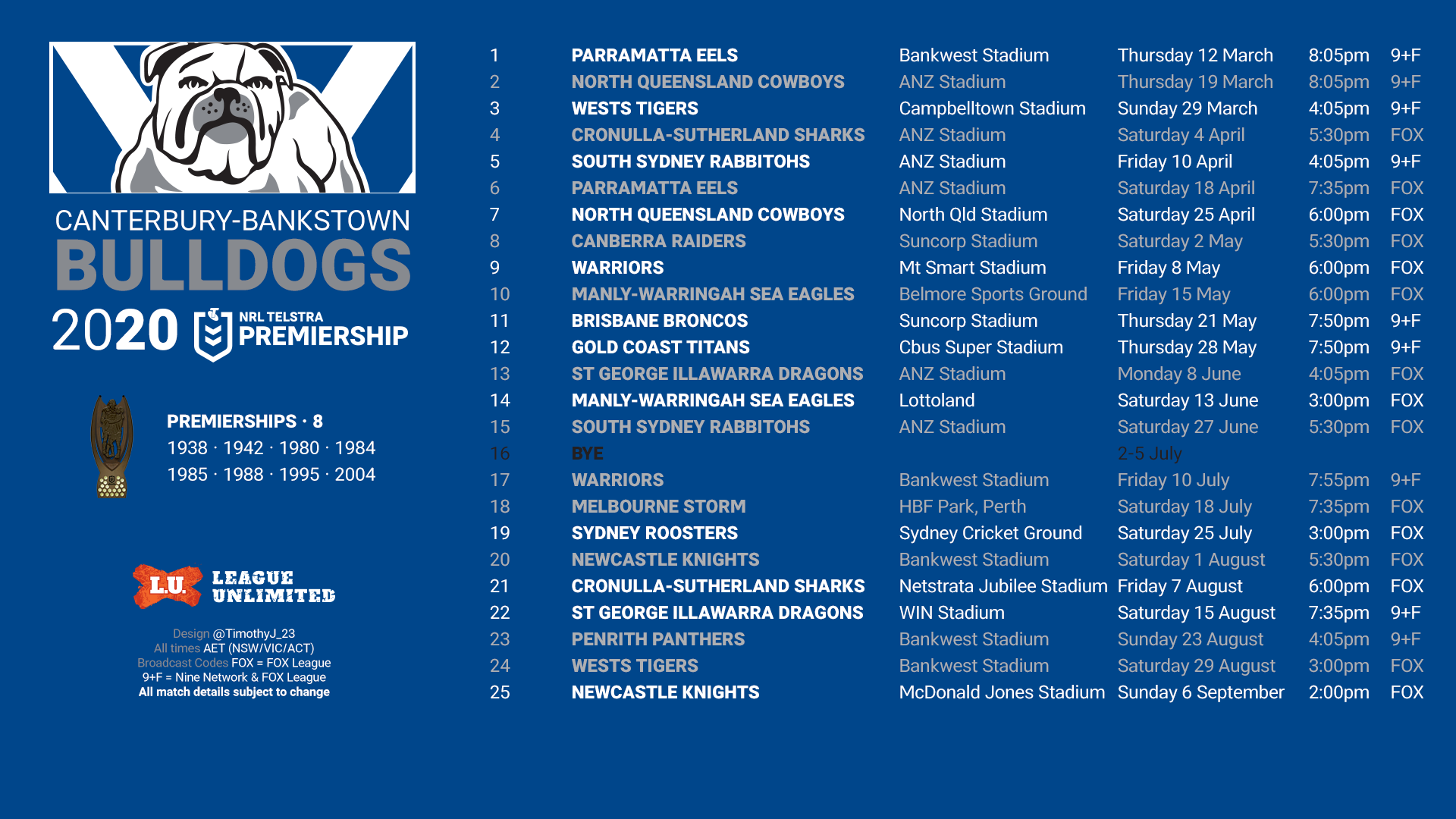 There is zero doubt that the Bulldogs have three key players to their chances in 2020 and two of them are their most consistent in Jackson and Hopoate. The other is Kieran Foran who is out with a serious shoulder injury until at least the backend of the season. With no Foran, the responsibility in the halves belongs to Lachlan Lewis who enters his third year of first grade. While Lewis has shown his strength in defence, particularly with his one on one tackling, it is how he unlocks the Dogs outside backs and edge forwards which the Bulldogs season hinges on. Capable of creating points with an attacking kick and a casual slight of hand, it is consistency in his game on a week to week basis that the 23 year old will need to acquire if the Dogs are to return to the finals.

Brandon Wakeham featured in 3 games last year, and impressed in those matches even scoring his first NRL try against the Broncos in Round 18. Wakeham went on to make his international debut for Fiji against Lebanon in the 2019 Pacific Test, where he scored 20 points on debut and went on to be nominated for the prestigious Golden Boot. Wakeham could just be the surprise packet the Dogs spine needs, as he firms to make the starting 17 for Round 1 following Foran's injury.