Andrew Jackson's look at the Cowboys tumultuous 2020 as we continue our 2020 club season reviews.

Personally, heading into the 2020 season I saw several parallels, at least on the surface, between the Cowboys and Eels of 2019. North Queensland too were buoyed by the opening of a new season, had underperformed the year prior but made some key changes particularly in the form of Valentine Holmes to address a lack of pace out the back. Like the Eels, I was expecting this would be a much-improved Cowboys outfit, riding the wave of momentum and energy that comes with opening a new stadium.

COVID-19 obviously brought a halt to mass numbers each week. But poor form did not help and it cost Paul Green his job. But Green paved the way the week prior to his departure, with rising star Hamiso Tabuai-Fidow and debutant Dejearn Asi given prominent roles and almost inspiring the Cowboys to a shock win over Penrith in his last game in charge.

That nod towards youth continued up front, headlined by emerging star Tom Gilbert who made his presence felt every time he was used in the middle as opposed to the edge. The pieces are there - all they need is a strong coach with a vision on how to use them - could Todd Payten be that man? 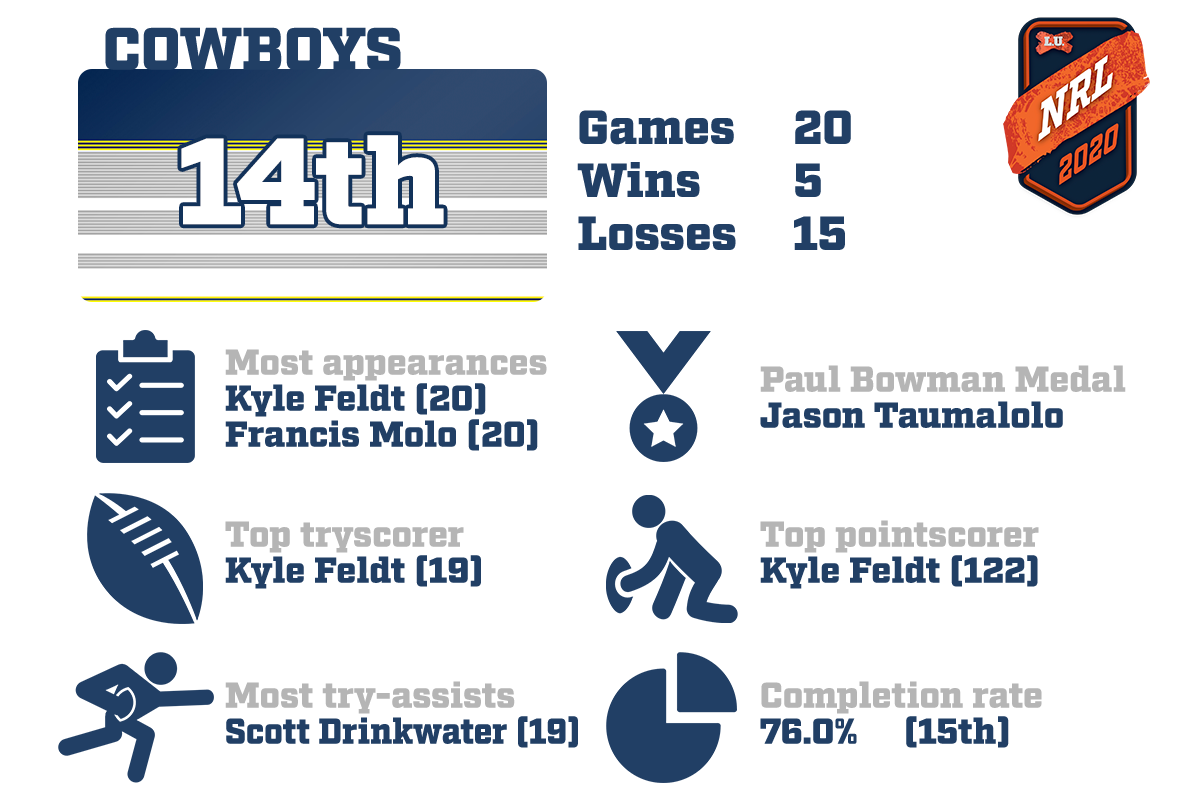 The 42-4 hammering at the hands of Parramatta was definitely the turning point that sent North Queensland's season on a downward spiral. Only a week prior they had produced one of the most stunning upsets of the season - a 32-20 win over the Knights. There was a clear game plan of kicking the ball into touch to limit the impact of Kalyn Ponga and a purpose to the way the Cowboys played. It also arrested a three-game losing streak and gave their finals hopes a brief glimmer of hope. But a 38-point loss to Parramatta, where North Queensland's flimsy defence was exposed, was the beginning of the end for the 2020 season. It was the start of a nine-game losing streak that cost Green his job and the Cowboys any hope of a finals finish.

As mentioned earlier, the biggest boost to North Queensland's season was the injection of youth. Previously the Cowboys had been heavily criticised for having a slow, lethargic backline that lacked potency in the red zone. The emergence of Tabuai-Fidow in particular worked to soften that concern. There was no shortage of power up front either, with Jason Taumalolo, Jordan McLean and Josh McGuire, along with Reece Robson at hooker, forming a strong motor to help the Cowboys get on the front foot. Tom Gilbert and Francis Molo only maintained the rage off the bench. Some more strike in the edge forwards could be one place to improve next year. Speaking of which…

Injuries to key spine players definitely played a part. Both Holmes and Michael Morgan spent extended periods on the sidelines and North Queensland struggled accordingly for leadership and experience. Edge defence was also a serious concern. 76 of the 92 tries conceded by the Cowboys were down either the right or left side of the field, pretty much split between the two corridors. It shows just how much Payten has to work on in terms of fixing vulnerabilities out wide on both sides of the field, with poor communication to blame there. At times it was the basics that the Cowboys struggled with, finishing with the second-worst completion rate in the league. Payten said as much to NRL.com a few days ago, explaining "our skill set, catch and pass, draw and pass, a lot of stuff we are doing in the tackle needs to improve and on the most part we just need to move faster when we carry the ball and when we move defensively."

Jason Taumalolo obviously led from the front, averaging 193 running metres in yet another year of dominance that we have simply come to expect from the hulking forward. Josh McGuire's impact cannot be understated either though, being the only other Cowboys forward to average over 150 metres. His aggression, while at times bordering on out of control, helped fire up a Cowboys pack in desperate need of an experienced leader. Francis Molo also had an incredible workrate in limited time, averaging a tick over 100 metres and 20 tackles from 38 minutes on the field. The other big achiever who does not get the raps he deserves is Reece Robson. The former Dragon's pace out of dummy-half is exactly what the Cowboys need but he also had a knack for knowing when to unleash it, a sign of maturity from the still developing hooker.

Tabuai-Fidow is a clear contender here having set the NRL on fire with his pace and footwork but Gilbert also deserves a mention in a tough position given the Cowboys' struggles up front at times this year. The 20-year was the Queensland Cup Rookie of the Year heading into this season and made his debut in Round 4. His aggressive demeanour immediately made an impression and saw Gilbert earn selection for another 11 games. Gilbert did miss three weeks through suspension so he will need to keep a lid on his fiery playing style but at the same time it is the exact injection of youthful confidence that the Cowboys need heading forward.

Todd Payten was able to produce serious results at the Warriors in trying circumstances. Can he do it at North Queensland? Away from the Sydney bubble, he won't be weighed down by the pressure but if Michael Morgan and Valentine Holmes are back to full fitness a top-eighth finish will be a bare minimum. There are enough talented young forwards coming through for the Cowboys to make the finals this year. The question is whether Payten can instil the consistency and defensive strength into a North Queensland side that leaked far too many points last year. That often comes back to attitude. With a new coach on board, it will become clear early on whether the playing group buys into Payten's vision.