If there was one word that defined the Canberra Raiders' 2020 season it was resilience.

The resilience to push past a mounting injury toll, last-minute travel turmoil and the heartbreak of a grand final defeat in an attempt to this time go one better.

Once again, they fell short - torn apart by a ruthless Melbourne Storm outfit at Suncorp Stadium.

Once again, they were left to wonder what could have been.

But if there were two moments that came to epitomise the resilient Raiders under Ricky Stuart's guidance, you have to go back to their 22-18 semi-final victory over the Roosters.

Finals football is so often defined by plays that require a split-second decision but have lasting consequences.

In the big moments, the Raiders stood tall.

Joseph Tapine bested five Roosters forwards all the way to the try line while later Charnze Nicoll-Klokstad desperately came across in cover defence to force Josh Morris into touch.

Stuart had the Raiders believing the whole time, that they were the underdogs that everyone had been writing off, the second that Josh Hodgson went down with an ACL tear.

It is a narrative that has long suited Canberra but as heroic as 2020 was, it was also yet another missed opportunity.

With a healthy roster, the aim this year will be to finally seize the moment when it matters, like Tapine and Nicoll-Klokstad had.

As talented as Canberra's roster is, talent is only one ingredient in a premiership-winning team.

Just as important is the man at the helm - and the consistent success of Trent Robinson and Craig Bellamy is no fluke.

Ricky Stuart is a different style of coach to those two.

He sits there on the sidelines on a plastic chair, at times drenched in rain, to feel what the players feel.

They invest themselves so heavily into the club and he does the same to them.

In July last year, Stuart was not even able to name a full 21-man squad, such was the injury crisis facing the club.

There is plenty of character in this Canberra side and so much of it comes from their passionate coach.

The Raiders made it so far last year without a host of big names - if they are all fit the belief is there that they have so much more to give.

There is not really a glaring problem or question mark surrounding Canberra that immediately casts doubt over their premiership credentials.

The way Melbourne exposed them out wide in the preliminary final last year was a concern though.

Curtis Scott was carved up on a number of occasions last season while Jarrod Croker also had a tendency to rush up.

No John Bateman means a new combination with Hudson Young in the frame to start in the second row ahead of Corey Harawira-Naera, adding an extra element of uncertainty there.

The loss of Bateman will be a blow given his competitive drive but Young has the adequate mongrel and aggression to make up for it.

Young's numbers in attack were also very similar to Bateman so the Raiders should not miss too much in that sense.

The indecision in defence on the edge though remains the primary concern.

Canberra will ease into 2021, with their first four games against 2020 mid-table opposition, before hitting Penrith and Parramatta in consecutive weeks after Easter. The Raiders will enjoy the bye before Origin 1 but prior to that face both Melbourne and the Roosters in a pair of vital back-to-back games in late May - and pending any COVID-related changes, the Tricolours face-off will take place at Perth's HBF Park.

Prior to the third Origin match they visit the Sea Eagles at Brookvale, and their run home features return clashes with Melbourne and the Roosters, as well as a trip to Auckland in the penultimate round to face the Warriors. 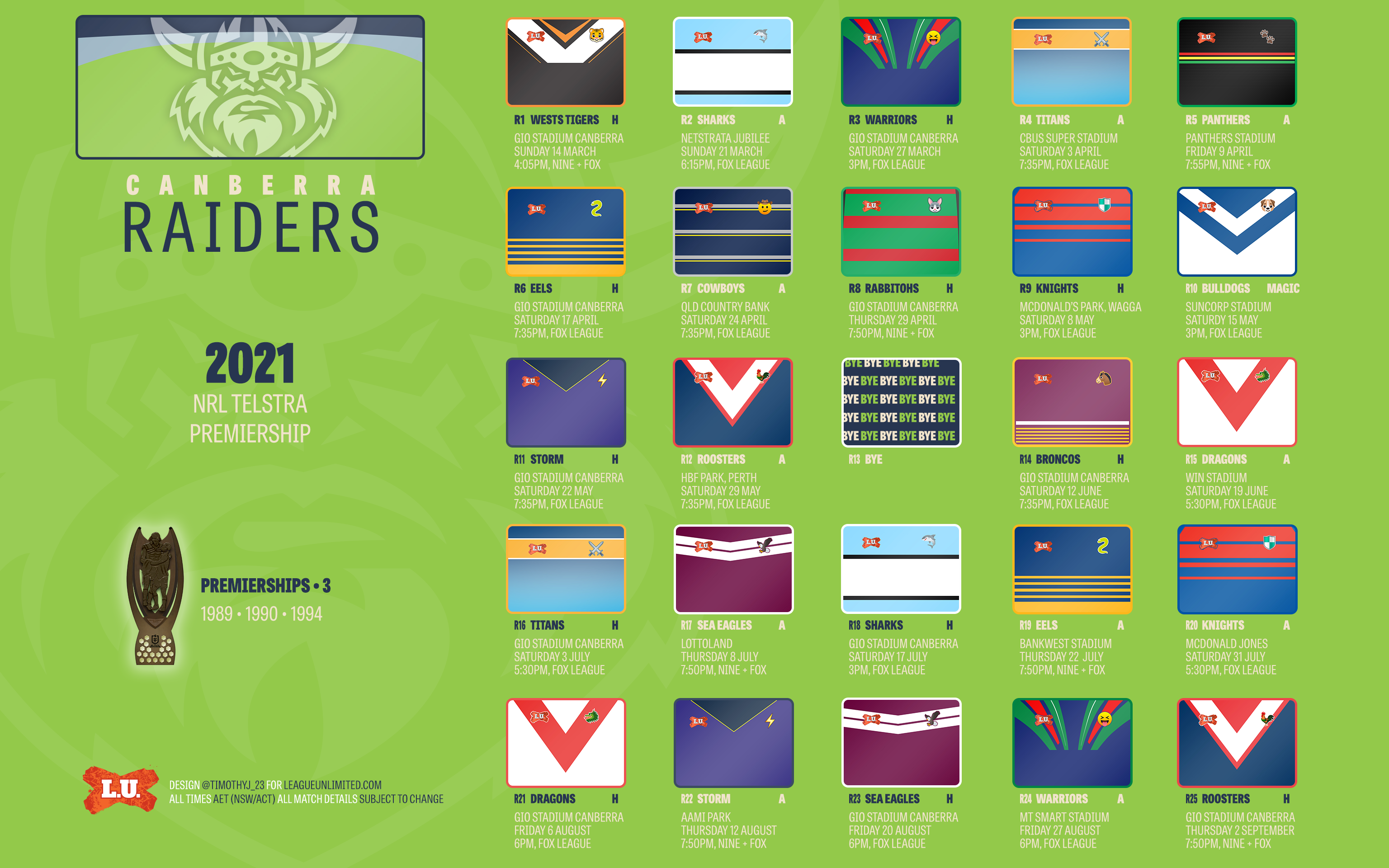 While there may be some pressure on Josh Hodgson to reach his stellar form pre-injury, the rise of both Tom Starling and Siliva Havili eases that potential headache.

When Hodgson was ruled out for the season most experts were quick to rule Canberra out of premiership contention.

The dynamic duo of Starling and Havili though rose to the occasion and they did not fall into the trap of trying to emulate Hodgson either.

Both had different roles in the team too - Havili capable of weathering the storm early in defence by taking big hits from forwards while Starling's running game made him a perfect impact player.

Havili's versatility and selfless attitude makes him a key addition on the bench but he may end up missing out given Starling's attacking potential (five try assists, 21 tackle busts and five linebreaks from 14 games last season).

Harley Smith-Shields was the pick last season and once again he looks like the rookie best placed to have a breakout 2021.

Smith-Shields was elevated into Canberra's top 30 squad last year after being awarded the club's Jersey Flegg Player of the Year Award in 2019.

Smith-Shields made just two NRL appearances in 2020 - one off the bench and another starting at centre, where he scored a try, made a linebreak, busted a tackle and ran 123 metres.

With Croker set to be sidelined for the start of the season he has the perfect opportunity to press his claims, although it likely would not be at the expense of the club captain.

It is more likely to see Scott drop out and Stuart has shown in the past he is willing to make big calls.