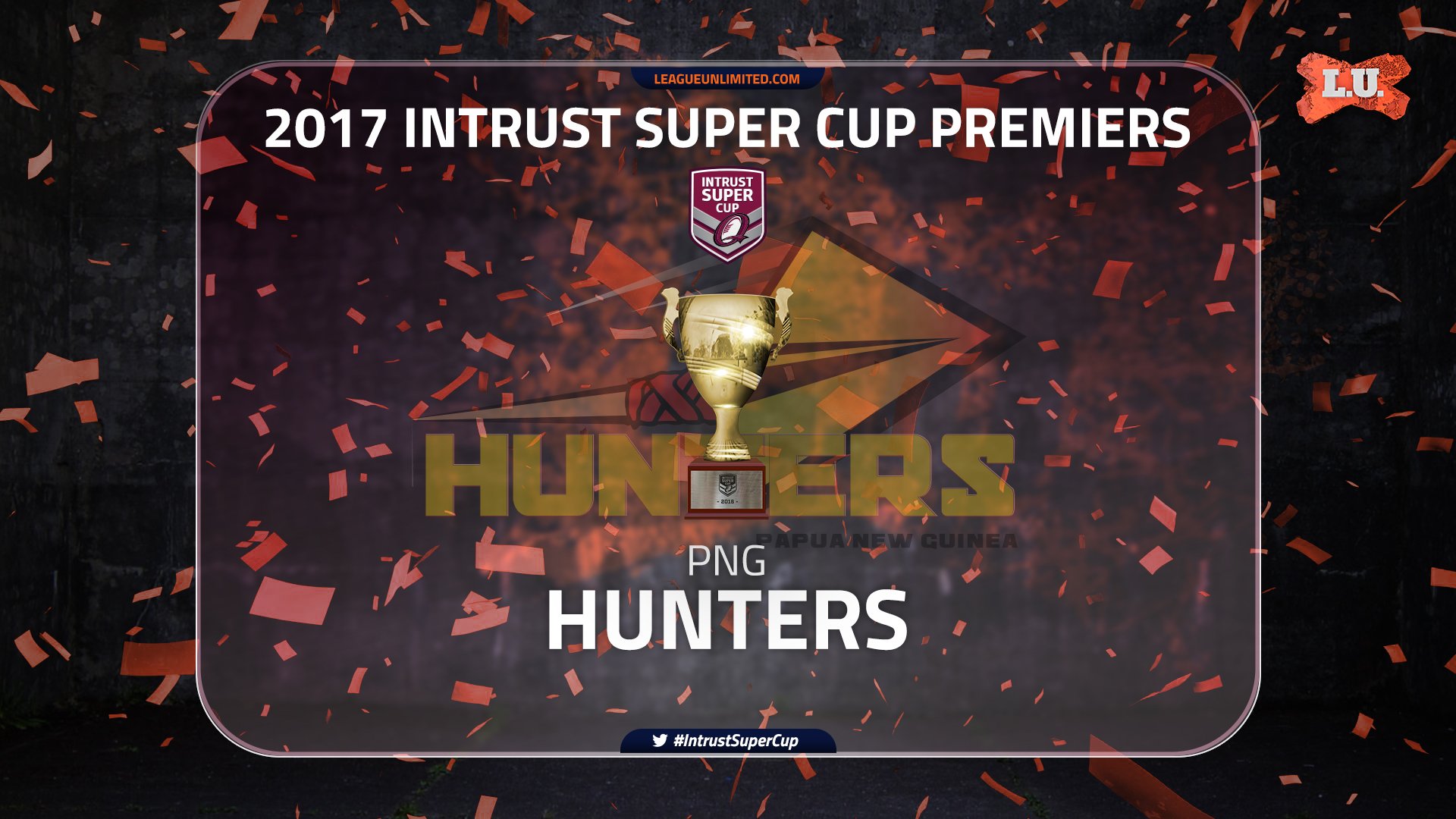 Ase Boas was the hero for the PNG Hunters - kicking the winning conversion as his team made history by claiming the Intrust Super Cup premiership 12-10 after a hard-fought win over a gallant Sunshine Coast.

While Boas kicked the goal, the scores were tied up with just over a minute to go when big Willie Minoga showed true determination to touch down on a Boas grubber in goal, sending the mostly pro-PNG crowd into raptures.

The try was sent to the video referee who confirmed the decision - sending the crowd off into cheers once again.

In the lead-up to the match-winning play; it was a game characterised by some tough defence - with both teams putting their bodies on the line.

The goal-line starch of the Hunters was also a remarkable feature of their win, as the side offered the Falcons plenty of chances to stamp their authority on the game by giving up the ball with repeated errors.

The game started ominously though for the PNG side, with the Falcons showing their class early, posting two quick tries.

The first was set up by impressive fullback Jahrome Hughes (a late confrimed addition to the side) who in the second minute, gave the ball to winger Matthew Soper-Lawer who made a good run to go over in their first set of six with the ball.

Joe Stimson missed the difficult conversion attempt, which in the end unfortunately for the Falcons, proved crucial to the result.

The Sunshine Coast were moving the ball around, really troubling the Hunters who seemed to struggle to contain especially the left edge of the Falcons, with former Hunter Justin Olam putting in a strong performance.

A fantastic pass from Ryley Jacks put Stimson put through a yawning gap out to the left and his successful conversion had his side out to a 10-0 lead inside the opening 10 minutes.

The Hunters responded with some strong defence and tried to lift their intensity across the field.

However, in trying to push the play - the normally reliable Wartovo Puara knocked on at dummy half, handing the Falcons another chance on the 40m line.

But as was the theme of the day, they were resolute in their defence and a heavy tackle from Wawa Paul forced the ball free from Jeremy Hawkins, and the Hunters had the ball back.

This pattern repeated until halftime - with both teams giving up the ball via poor handling when they were given a chance to attack. It became a game for the forwards who worked hard through the middle all match.

PNG kept threatening and were getting closer to scoring, but the Falcons defence stood just as strong, with Hughes performing well at the back to clean up all the Hunters kicks.

With four to go in the half - the Hunters earnt themselves their best chance all half after forcing a line drop-out, only for Stargroth Amean to lose the ball going for the line.

With no side able to capitalise, the teams went into halftime with a 10-0 lead to the Falcons.

Things started in the worst possible way for the Falcons, knocking on from the kick-off.

This time, the Hunters made sure the capitalised - but again it was scrappy.

An Ase Boas kick through was missed by the Falcons before the line and also missed many Hunters hands before Bland Abavu eventually picked it up and popped a pass to Watson Boas who put the ball down to score.

It was sent up as a no try - but the video referee overturned the ruling, giving the PNG side their first points of the match.

The Falcons never gave up or dropped their effort and up the other end of the field, hooker Brandon Smith pushed his way close to the line near the posts, but was held up.

From there, that familiar pattern of poor errors followed up by strong defence plagued both teams; but the tension never left the air.

Unfortunately, in that time Watson Boas was carted off the field with an injury concern.

The Falcons too suffered from the loss of Hughes, who went off with a suspected broken foot, and skipper Dane Hogan for a HIA during the second half.

When played resumed, the Hunters gave the ball away again with an incorrect play the ball.

The Falcons again pressed to try and force the advantage, but the Hunters wall again proved impenetrable.

The crowd favourites received a penalty with two and a half minutes to go and went agonisingly close to scoring, only for the Falcons to show their mettle.

But with just over a minute left in left on the clock; Minoga chased through hard to score the key try.

It was a game between two teams who have captured the hearts of fans, and it was a cruel end to a remarkable season for the Falcons.

They had thrilled in the finals with some attacking play throughout each week to earn their place in the decider.

However, the day belonged to the Hunters and their fans who helped push the attendance to a competition record 11,260.