Will Kevin Walters be the man to bring the Brisbane Broncos from the rubble or will 2021 be a repeat of the embarrassing season that was 2020?

The Broncos' 2020 campaign was a disaster, as the club collected their maiden wooden spoon. Despite winning two from two to open the season, the Broncos failed to find any rhythm after the restart of the competition in May as the global pandemic took charge. When they returned in May, the Broncos lost six straight matches with a win against the Canterbury Bankstown Bulldogs giving them some hope for the remainder of the season. Unfortunately, it would only get worse for Brisbane, losing their last 11 games of the season to cement their place in history as the worst performing Broncos' side of all time.

2021 brings Broncos legend, Kevin Walters into the frame as the clubs' head coach after four seasons in charge of the Queensland State of Origin side. Unfortunately, the 2021 season does not look all to promising for the Broncos, firstly, with the young prodigy, David Fifita moving to rivals the Gold Coast Titans and secondly, an injury to star centre Kotoni Staggs which won't see him feature until the middle of the season.

A lot of things will have to go right if the Brisbane Broncos are to pose a threat to the competition favourites in 2021. In fact, it would most likely require a miracle. However, it was just 18 months ago when the Broncos last featured in the finals with a similar squad to the one they boast now. The likes of Payne Haas, Anthony Milford, Patrick Carrigan and Tevita Pangai Jr will be pivotal if the Broncos are to make a run for the title along with some extra help from their upcoming young stars. Brisbane's forward pack should be up to the job, but special performances will need to come from those playing in the spine. Young 19-year-old, Tom Dearden became a regular during the second half of last season showed glimpses of the player he could one day become. In his 10 starts at halfback, Dearden created three tries, forced a total of five dropouts whilst running for 63.4 metres per game. Just 17 games into his career, Dearden could be expected to improve throughout the year and will need to do so to keep his spot in the side. If the halfback can take more control and responsibility of the side, it will enable Anthony Milford the freedom to return to his best football which gives the Broncos their best chance of making a push for the premiership in 2021.

There are a lot of reasons why the Broncos will not challenge for the title in 2021 and their performances last season are one of them. Brisbane struggled on both ends of the field last season, scoring the least number of points (268) whilst being the only side to concede over 600 points last season (624). After the restart of the competition, the Broncos only restricted their opponents to under 20 points just twice in 18 matches, a feat which can not be repeated if the Broncos wish to improve on their 2020 season.

However, the current squad as it stands is very similar to that of the 2020 squad besides a few exceptions. The loss of David Fifita to the Gold Coast Titans is a massive loss and one that Broncos fans will be disappointed about given the talent and x-factor ability that the young backrower possesses. The 20-year-old only played nine games for the Broncos' yet managed to average five tackles breaks and 128 run metres along with four tries as he demonstrated his immense potential.

Another major loss for the Broncos is the injury to Kotoni Staggs, suffered at the end of last season, ruling him out for the opening half of the season. One of Brisbane's best players and a potential candidate for the New South Wales side down the track will be a big exclusion in an inexperienced Broncos' side. At just 22 years of age, Staggs has managed to score 23 tries in just 47 appearances and has been touted for higher honours as he continues to impress the wider NRL community, especially during 2020 as he crossed the line on 10 occasions during his 14 games last season.

Assuming minimal changes due to COVID-19, Brisbane have a few tough games up early, starting with the Eels and also facing a rejuvenated Titans in the first fortnight. By the time ANZAC Round hits, they'll have faced Melbourne, Souths and Penrith - all 2020 preliminary finalists - and then meet Parramatta and the Titans again in consecutive weeks.

While they don't provide quite as many players to Queensland's Origin squad as they used to, the mid-season period remains important - prior to Origin 1 they'll be missing some of their best headed into a clash with the Dragons at Kogarah, while they enjoy the bye prior to Game 3 (a stand alone weekend for Game 2 remains in the schedule).

Brisbane's run home includes two clashes against Newcastle, along with home games against the Roosters and Warriors, and another Kogarah trip to face Cronulla. 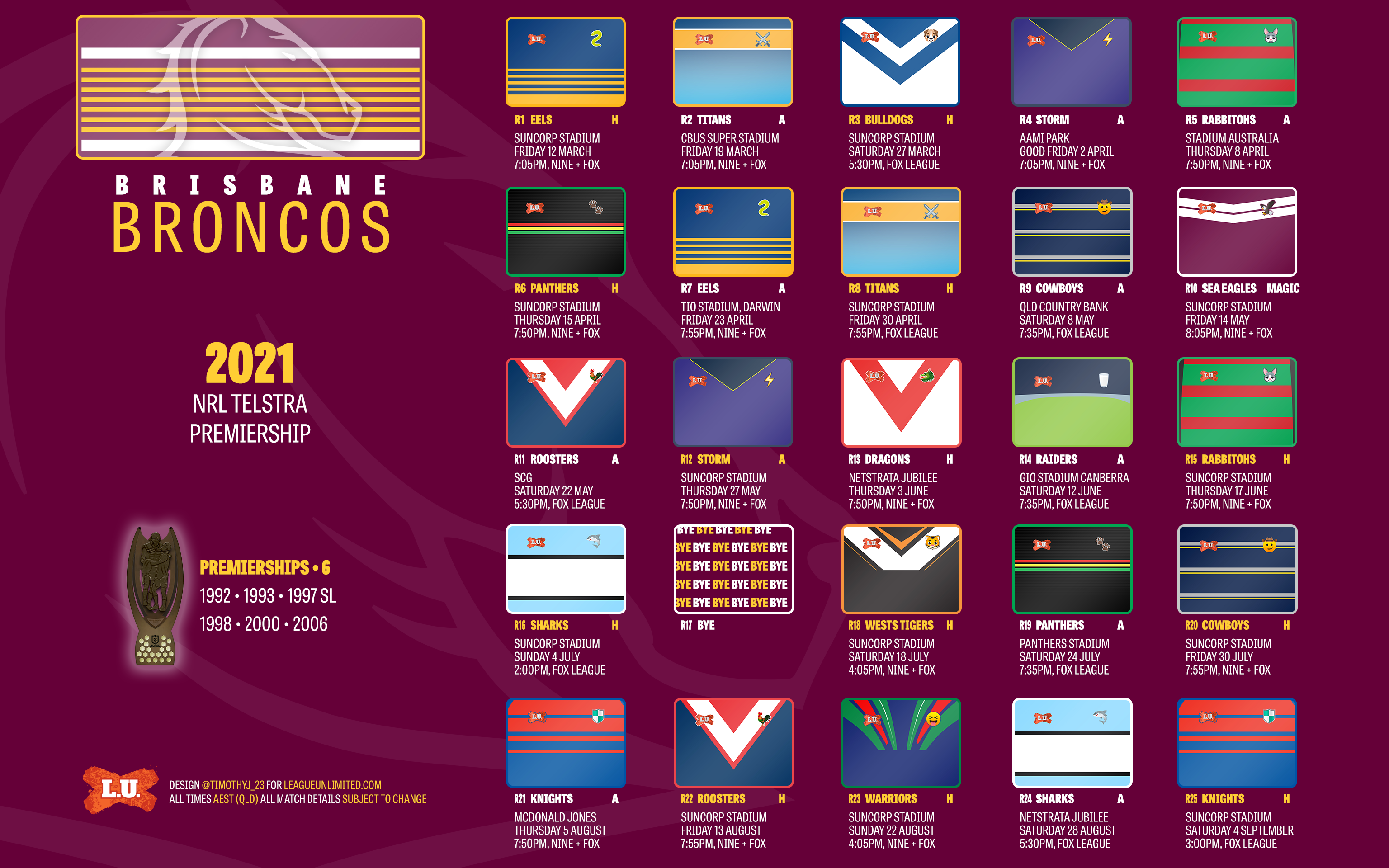 Right click and choose "Open image in New Tab" to see the draw in high-resolution.

New South Wales prop Payne Haas will once again be a key component of the Broncos side during the 2021 season. The 21-year-old had another monster season in 2020 averaging 175 run metres and 33.7 tackles per game in 72 minutes per game. The inclusion of John Asiata into the middle forwards rotation could allow Haas some extra minutes on the bench which should in hand produce his impact on the field.

Queensland Origin winger Xavier Coates will play a big part this season for the Broncos after an excellent debut Origin series. Despite an inconsistent 2020 season, the 19-year-old averaged 115 run metres per game which should see a rise during the 2021 season. Five tries in 12 appearances wasn't an ideal strike rate for Coates, however, it's hard to cross the stripe for a side that can only manage to score 13 points per game. Coates try scoring record for 2021 is largely dependent on whether or not the Broncos' spine can spark some creativity, something they desperately lacked during the 2020 season.

19-year-old Tesi Niu is set to feature this season for the Broncos after making six appearances in his debut season. Expected to play in the centres, the youngster filled in at fullback last year and proved to be a hard kid to tackle, breaking 13 tackles in his four starts at the back. A highly touted prospect having already represented the Tongan national side during 2019 is set for a big year if he can avoid any potential injuries.

Full player movements for 2021 can be viewed here.

Based on current signings - best 17 available with all players fit.